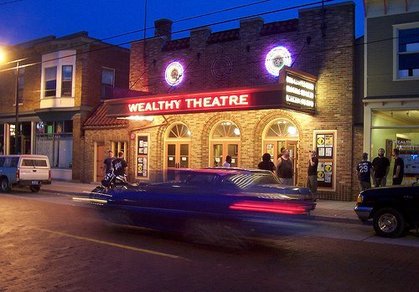 The Wealthy Theatre, 1130 Wealthy Street, in Grand Rapids, Michigan, was constructed in 1911 for vaudeville and live theater, and later became a neighborhood movie house.

The theatre served during World War I as a warehouse for the Michigan Aircraft Company, and in the 1960s, offered the only regional venue for foreign films. It closed in the late 1970s and stood empty and decaying for more than 25 years before the South East Economic Development neighborhood association launched a capital campaign to fund its restoration.

The Wealthy Theatre re-opened in 1998 as a community arts center and heralded a transformation of the entire Wealthy Street business district. And in March of 2005, the theatre was acquired by the Grand Rapids Community Media Center and their recent renovations in the main lobby compliment the latest additions of state of the art High Definition digital projection and Dolby 7.1 concert studio surround sound. There has never been a finer time to screen films at the Wealthy Theatre and Thriller! Chiller! is proud to be one of the very best events to showcase these improvements to an eager public.

Started in mid-Summer of 2007, the GRCMC staff, Thriller! Chiller! and members of the West Michigan film community assisted in the realization of this space with the removal of more than ten tons of broken concrete and dirt during the first scorching weekend in August. This theatre boasts state of the art digital projection and sound with all new stadium seating and carpet to splash with your popcorn and beer when the thrill and the chill strikes you during this year's festival.

Thriller! Chiller! is extremely proud to have hosted the first official event held here - a free screening of George A. Romero's Night of the Living Dead - in October of 2007.